In rtk, containers are special widgets that can hold one or more other widgets (called children) and manage their position and dimension according to the semantics of the specific container type. Containers can be nested to create complex layouts. And because containers are themselves widgets, the attributes, methods, and event handlers defined by rtk.Widget are all applicable here as well.

rtk.Container is the simplest type of container, and serves as the base class to all other container widgets, and so other containers also offer at least this interface. It is a generic, unopinionated container that expects children to specify their geometry (relative to the parent container position).

Children of containers are placed into cells. A cell is that portion of the container that has been allocated to one child widget. In an rtk.Container, cells given to child widgets are independent and don't affect one another. Subclasses can and do change this aspect. For example, box containers layout children adjacent to each other, so prior siblings will affect the position of later siblings.

Containers ask their children to constrain their dimensions so that all children can fit within the container (whether the container has an explicit size, or its own bounding box specified by its parent), but sometimes children can ignore these constraints, for example if you have specified an explicit size of a child widget that's larger than the container can hold without itself overflowing. Containers don't clip their children, rather it's up to the child widgets to clip themselves if necessary (e.g. rtk.Text.overflow).

As with all widgets, container geometry (coordinates and dimensions) can be static values, or specified relative to the parent (e.g. 80% of parent width).

When no explicit width or height is set, a container's intrinsic size is dictated by the children contained within it.

The diagram below depicts how the widget box model works in the context of containers, using a 200px fixed height container. The blue area represents the cell, while the purple box is the widget itself. 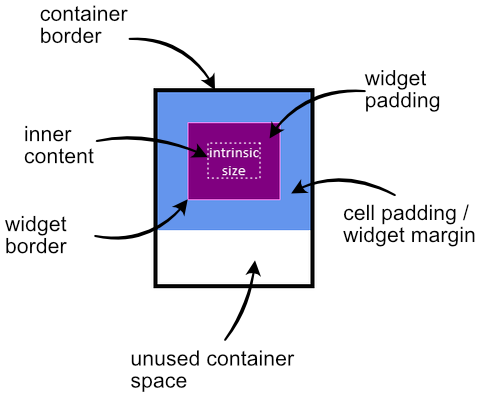 The following code generated the above image (minus the dotted border around the text which was added later as a visual aid to denote the boundary of the inner content):

With rtk.Container, cells are all overlaid one atop the other, with either widget margin or cell padding affecting the position of each cell.

Unless the container is given an explicit size, alignment is done relative to the current size of the container based on all previous siblings. For example:

When adding a child to a container (e.g. via add()), you can optionally set additional attributes that control how the container will layout that specific child widget within its cell.

These are the base layout attributes for all containers, but specific container implementations usually include additional ones, or may extend the possible values for these cell attributes, or change the semantics.

An array of child widgets, where each element in the array is {widget, cell attributes table}

Create a new container, initializing with the given attributes.

Any positional arguments passed will be automatically added as children of the container via add(). In this case, cell attributes can optionally be specified via a cell field on the child widget.

Which is equivalent to:

This makes it possible to specify a full widget hierarchy for the entire window (or arbitrary subsections of it) using a single declaration of nested widgets (otherwise known as an S-expression).

Adds a widget to the container.

The cell attributes table is optional, and may be passed either as the second argument, or as the cell field in the widget instance itself.

The second form, while slightly more verbose, may be preferred when you want to dictate the cell behavior at widget instantiation time, rather than during add().

Updates the cell attributes of a previously added widget.

Adds a widget to the container at a specific position.

For rtk.Container containers, it isn't really necessary to insert widgets at specific positions as the z-index more easily controls display order. But for subclasses such as boxes where widget order is visually relevant and independent of z-index, this method can be used to control the layout of widgets relative to one another.

Replaces the widget at the given position.

The existing widget at the given index is unparented from the container and the new widget is added in its place.

Removes a widget by position.

Removes a widget from the container.

Moves an existing child widget ahead of another child.

Moves an existing child widget after another child.

Returns the widget at the given index.

Returns the position of the given widget.