Boxes lay out widgets sequentially in one direction (either horizontally or vertically).

This is the base class for single-direction box layouts. Don't use this class directly -- use rtk.HBox or rtk.VBox instead. However, in order to avoid documenting everything twice, the interface for both box orientations is documented here.

For example, if we say "fills the cell in the box direction" it means the fill is horizontal for HBox, and vertical for VBox.

While boxes support all the cell attributes documented in rtk.Container, the most important box-specific cell attribute is expand. The expand cell attribute controls how much space is allocated to a cell in the box direction.

When expand isn't specified (or when it's explicitly 0) the cell will be only as big as necessary to fit its widget, but expanded cells will force the overall box to fill out to its own bounding box (in the box direction) and then will compete with one another for that available space.

This mechanism can be used to create fluid layouts. For example, an rtk.HBox added directly to an rtk.Window can create a multi-paned layout that scales with the window. Consider:

This code generates a box that looks and scales like this:

For this reason, it's preferred to use expand for responsive layouts, which behaves more intuitively.

rtk.Box.FLEXSPACE can be added to boxes in place of a widget to push any subsequent widgets all the way out to the far edge of the box. Flexspaces consume all remaining space not used by widgets. This is similar to adding an rtk.Spacer with expand=1, except that flexspaces do not create cells, they only modify the positions of cells after the flexspace. Flexspaces are therefore a tiny bit faster, and a tiny bit more convenient and readable.

If multiple flexspaces are added to a box, the unused space will be divided between them (as if they had all used the same expand value).

Note that as flexspaces don't technically create cells, any cell attributes passed to add() are ignored. This means, for example, bg can't be defined on flexspaces, because there's no cell to color. If you do need this, explicitly add an rtk.Spacer widget with expand instead.

Used with the stretch cell attribute to control cell size perpendicular to the box direction, where lowercase strings of these constants can be used for convenience (e.g. 'siblings' instead of rtk.Box.STRETCH_TO_SIBLINGS). These strings are automatically converted to the appropriate numeric constants.

Cell attributes are passed to e.g. add() and control how a child is laid out within its cell.

In addition to these box-specific cell attributes described below, boxes also support all the cell attributes from the base rtk.Container. However in some cases the possible values are extended, so those deltas are documented below.

Dictates allocated cell size in the box direction and only in that direction (default nil).

If not defined (or expand is 0), which is default, then the cell will "shrinkwrap" to the child's desired size in the box direction. By setting expand to a value greater than 0, the cell will be sized according its ratio of expand units relative to all other expanded siblings, minus any space needed for non-expanded children.

For example, if only one child in the box has expand=1 then space for all other cells will first be reserved to fit their (non-expanded) children's desired size, and then all remaining space in the container will be given to the expanded cell.

Or suppose you have 3 children in the box and all of them are given expand=1, then the total expand units is 3, and each child will be given 1/3 of the container space.

Note that expand only controls the cell size in the box direction. The child will not automatically fill to fit the cell; for that use either fillw or fillh (depending on the box direction). Non-filled children however may be aligned within an expanded cell by using either the halign or valign cell attributes (whichever corresponds to the box direction).

This image demonstrates expand with rtk.HBox, with the blue color indicating the background of the expanded cells. (rtk.VBox works the same except of course that the expansion is in the vertical direction.)

In practice obviously an infinite size isn't possible, so instead the box calculates expanded cell sizes as if the viewport wasn't flexible, and instead uses the viewport's own bounding box as the needed constraint. But this behavior is subject to change in future, so it's recommended not to rely on it.

Controls how the child will fill its width within the cell (default false). If true, the child widget will fill the full width of the cell. Otherwise, if false, it will use its natural width.

Controls how the child will fill its height within the cell (default false).

This diagram depicts the difference between expand and stretch for the different box types: 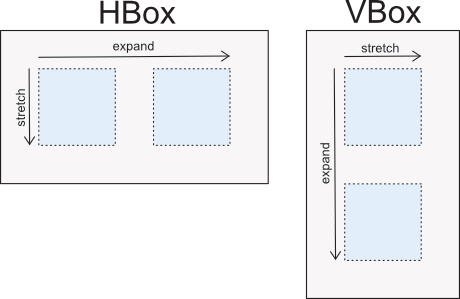 Like expand, stretch dictates the cell size, not whether the widget should itself fill out to the cell's edge. For this, fillw or fillh (whichever is opposite of the box direction) is still required.

Stretching can be useful for alignment purpose. For example, if you have an rtk.HBox and set the cell attribute valign='center' the question is what should the widget be centered vertically against? Unless stretch is explicitly set to STRETCH_FULL, the implied value is STRETCH_TO_SIBLINGS, so that the widget will be centered relative to its tallest sibling. If stretch meanwhile is STRETCH_FULL, a valign='center' widget in the rtk.HBox will be vertically centered relative to the box's own parent-imposed height limit.

Here are two examples showing the behavior of stretch in the context of two HBoxes, where stretch applies in the vertical (i.e. perpendicular) direction. The thick black rectangle is the boundary of the HBox. In the left example, the center-valigned purple sibling is centered relative to the grey h=0.7 widget because stretch=siblings is implied due to non-top alignment. In the right example where stretch is true, now the purple widget is centered relative to the HBox's full height.

The bg cell attribute does not apply to the spacing area, however the box's own bg does.